Articles
People with Difabilities are More Engaged in Village Development
25.May.2015

Bualasokhi Waruwu (15), a difable kid whose mother passed away in 2005 earthquake is eager to learn even though he has been in the fifth grade for four years. Surprisingly, he has his own chicken farm. 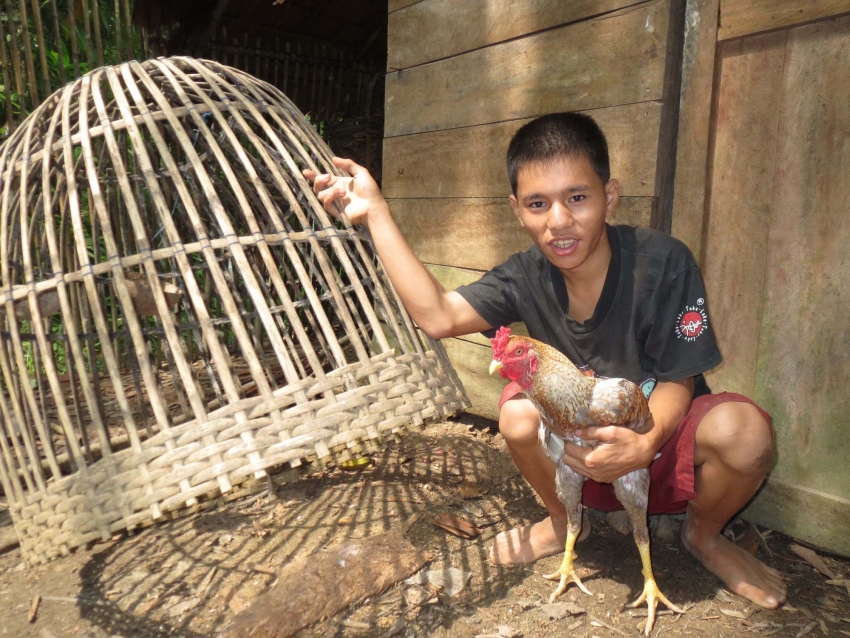 Bualasokhi lives with his father, Fao’aro Waruwu (51) who teaches him many things. Unfortunately Fao’aro cannot help Bualasokhi to study because he himself cannot read and write. Fao’aro teaches Bualasokhi farming and gardening. CDRM&CDS supported Bualasokhi with capital for chicken farm. Bualasokhi has turned out to be an independent child. He takes care of his chicken and helps his father gardening when he comes home from school. He can also take care of himself. From his chicken farm, Bualasokhi can sell 15-25 eggs every month. Money earned from the sale is used for his school and for household supplies. “My son now consumes eggs regularly. I realize that he is getting healthier and braver, and his intelectual acquisiton improves. I hope he has a bright future when I’m no longer around him,” his father said.

Fao’aro told his story of engagement in difable people empowerment facilitated by CDRM&CDS. “Before, I had to attend village meeting only when there was
aid from the government. I was once required to share my experience on animal farming. Honestly, I was a bit worried and unconi dent since it was my i rst time standing and speaking in front of public. I did it anyway due to my sense of duty, and shared my story.” Fao’aro also told about his son’s engagement in the village meeting. “Never did I allow him to participate in the village activities as I used to worry he might do something harmful to others. Now I realize his engagement will improve his character.”

Akheulawe Village head, Amolisi Gulo, also encouraged more engagement of difable people in every village meeting. From July 2014 the village authority
started to engaged difable people in KEFAS cooperative and assisted them with capital for their business ventures. “I used to think the difable people should not work nor have business because they are subject to charity. But after participating in orientation by CDRM&CDS, I got to know that difable people have the right to development opportunity.”